Just this past week, Exchange 2013 has been RTM’d (Released to Manufacturing)! We’re still a few months away before the general public can start their installs, possibly longer for migrations since we’re waiting for the release of SP3 for Exchange 2007/2010 specifically for Exchange 2013 migration – but more on that later.

For now, it’s time to take a look under the hood to see how Microsoft has revamped the setup process. Plus, we’re going to dig into some troubleshooting.

Setup is smart enough to handle the basic Windows component installs, however if we don’t do some careful planning we’re going to end up with Error and Warning messages, coupled with MANY reboots.

So instead of perpetually restarting setup, let’s take care of the prerequisite components first.

Use this one-liner in Powershell to install the prerequisites, and then reboot (Desktop Experience requires a reboot)

After the necessary reboots, we need to download and install some additional components

When you start the UCMA 4.0 installation, if you failed to run the Powershell command for the local prerequisites, you’ll see a message that Media Experience in missing. This is because UCMA 4.0 requires the Desktop Experience feature, which is installed as part of the prerequisites, and a reboot is required.

If you’re installing the UCMA 4.0 Preview (which should only happen with Exchange 2013 Preview), setup will fail because of the VC++ 11 Beta runtime installed.  Uninstall via Add/Remove Programs

NOTE: In RTM Visual C++ 2012 is installed and this step is NOT needed.

Another hiccup that you’ll see after setup if you didn’t install all of the prerequisites: if you try to open ECP, you’ll run into this error:

It’s because you did not install the prerequisites properly, which include Windows Identity Foundation.

Although it won’t say you need to reboot – DO IT and save some time!
Restarting services after installing the component install will just yield in an Unknown Error.

Once you have your prerequisite components installed, you’re ready to fire up the setup process. It’s MUCH easier and cleaner than Exchange 2007/2010!

Setup begins by copying its files down to the server 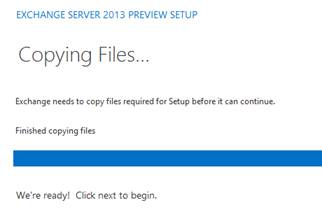 Once complete, we dive right in to installation

NOTE: The Checking Required Software piece has gone away in RTM.

Next we select our server roles. In Exchange 2013, we only have a Client Access Server or Mailbox Server. Here are a few changes of note from Technet:
http://technet.microsoft.com/en-us/library/jj619283%28v=exchg.150%29.aspx

With a new Organization we specify a new Exchange organization name. Against, upgrades are not currently available.

Finally, Microsoft integrates Forefront malware protection on a non-subscription basis. It’s fairly tame out of the box so leaving it on is a nice feature, which we can tweak later.

Now let’s prepare to run setup. It will take care of AD preps if necessary.

NOTE: As mentioned, Exchange 2013 doesn’t work in an existing Exchange org at this time, since 2007/2010 SP3 isn’t out yet! So we will need to setup a new organization.

And off we go!